Flight to Ranchi:Cellphone was hacked

Journey to – 14th April 2007, took Indian Airlines flight. Used auto to reach domestic airport. Sonu ji(younger brother)accompanied me till airport. At airport while waiting for boarding, I started writing in diary about some of the events and about mamu
. 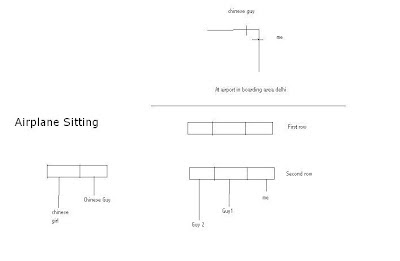 Same Chinese guy who was sitting in adjacent corner in boarding area was also sitting in same row in plane on the other side [may not be a coincidence]. A girl accompanied him inside the plane. I had checked in cabin bag while kept laptop bag with me in upper cabin bag section.

Boarding was on time, flight moved a little bit then stopped. I started composing SMS to Papa. I made change in SMS from “just started” to “yet to start”. Flight again moved after that. I pressed send button of SMS. Shortly after that 3 alarms of 7:58 pm, 7:59pm, 8:00pm went on much before actual time.I had not set those alarms either. This means my LG mobile device was bugged and was remotely controlled. It was CDMA based service provider.

Shortly after this an Airhostess arrived and asked ,” Please switch off your mobile.”

She came back after a few minutes and she said along the lines.

“Our equipment shows you have not switched off your mobile yet.”

That was strange and I had not taken out my mobile after alarms mentioned earlier. As my neighbor had 2 mobiles it was hard for me to believe that they had generic device which can locate switched on mobile with passenger. I do believe they might have some device that was used to bug my phone. I just pretended that I didn’t get what she was saying. I had taken out mp3 headphone from one of the ear and just replied

She didn’t ask anything and returned. It was clear that I was under hostile environment. One possibility I saw was someone want to take/exchange laptop from laptop bag. The laptop had the data related to Mafia.

Dinner was being served. Air hostess asked “Veg or non-veg”. I replied “Veg”.

On safe side I just ate 40% of the dinner. When air hostess came back to collect the dinner plate, I changed my spectacles to dark goggles. It allowed my eyes not being visible from outside just in case I take a nap. Within 5 minutes and around 20-25 minutes before landing lights inside the plane was switched off and environment was conducive for a nap.

I switched on light above my head. When an airhostess opened adjacent cabin, I made point that I had not slept by moving my head. After around 10 minutes lights were back and soon after that it was time for landing.

Points : Not sure what was the intention of mafia probably wanted to change laptop that has data to write this blog. Also the reason to show bugged alarm might be to frighten me. One thing is for sure they are tracking my mobile communication and possibly that of my family.